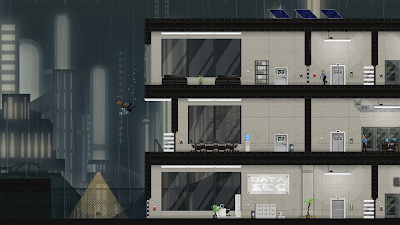 Tom Francis is one of my favorite gaming writers. He works for PC Gamer UK, and has been responsible for some of my favorite features written on the ways players can explore and engage with the games they play.

You can always tell one of Tom's reviews by the glee with which he approaches the subject. They're full of breathless descriptions of bizarre or interesting situations the games let him get into, dumb, fun tricks he's logic'd himself into trying. For instance, take this example from his review of Deus Ex: Human Revolution:

He’s inside gang territory, trying to make it to a door at street level. He decides to use the surprising development of a vending machine falling out of the sky to distract the gangsters, so that he can drop down and get to the door without attracting attention. A sort of pepsi ex machina.

Jensen hurls the vending machine arbitrarily and tumbles off the building after it. His Icarus Landing System kicks in, floating him safely towards the street below in a dazzling ball of golden light. When the vending machine crashes to the ground, the armed gangsters nearby all look at it in surprise. Then they look at the dazzling ball of golden light floating down to land across the street, and they draw their guns.

Francis's critical perspective on games seems fueled not so much by the choices and scenarios that games force on people, but by the ones that they allow. His writing celebrates games like Deus Ex for allowing the player's own mad ideas to be a major factor in their success. As such, it's not surprising that when he decided to design his own game, it became something like an art studio for brilliant works of player creativity.

It works like this: Tom's game, Gunpoint, is a stealth platformer about breaking into buildings without being shot by some EXTREMELY trigger happy guards. The levels are full of interactive elements - light switches, door panels, cameras, alarms. On the surface, these are all on the side of the guards, systems in place to thwart your hero, Conway, from reaching his goal. Except Conway has an ace up his sleeve (also: springs in his pants, but that's neither here nor there): The Crosslinker. 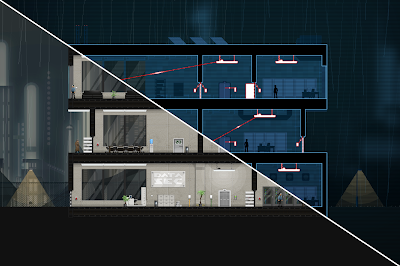 Mousewheel up, and you enter Crosslink mode. All of the details of the level fade into darkness... Except the devices. Those light up like lights on a Christmas tree. And, like a child opening his presents on Christmas morning, you can start to play...

Drag a line from any device to any other to connect them. A light switch will now open a door. A guard walking through a motion sensor will call an elevator to his floor, distracting him. Re-wire a hand-scanner so that, instead of opening the door it's connected to, it activates the scanner on the other side, activating the door in the opposite direction, slamming into the guard and knocking him out. The Crosslinker turns every level into a playground for crazy Rube Goldberg machines and nasty pranks.

The brilliant, compelling thing about this design is how unnecessary most of these tricks are. Gunpoint is built so that brute force is almost always an option; guards can be pounced from behind and knocked unconscious; you can even buy a gun and shoot them dead - although, in keeping with the idea that this is a stealth game, gunshots will quickly summon difficult-to-avoid-snipers at the level exit (although even these can be avoided with enough upgrade points invested in a bullet-deflecting belt). Even when using the Crosslinker, there are a few simple moves (the aforementioned suicide-by-door trick, for instance) that can be used over and over to clear levels... efficiently. You could play it that way.

But most likely, you won't. Instead, you'll sweat, and puzzle, and play, until you've found a convoluted, beautiful solution to your problems. Because you can.

The motivating philosophy behind Gunpoint is, I think, that if you give players freedom, and have faith in them to use it, they will. You don't HAVE to set off a cascade of opening doors, moving elevators, blaring alarms, and darkened hallways that culminates in a man being electrocuted by a light switch. You do it because it is, objectively, awesome. And it is equally awesome that the game allows you to do it, with no scripting or forcing. The only motivating desire is the desire to do something great with the vast, flexible tools provided. It's the difference between "Man, that game just did some awesome stuff," and "Man, I just did some awesome stuff."

It's challenging, refreshing, rewarding. I expect videos of Gunpoint solutions to be a big hit on Youtube (and I'm quietly hoping Francis will implement some basic video-capture elements into the game to make sharing mad, inspired solutions that much easier). Because who doesn't love showing off just how crazy they can be, when someone gives them the chance? 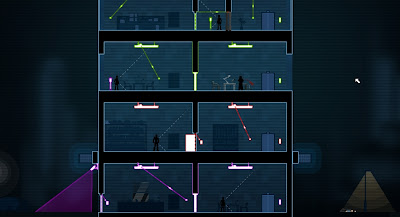 In closing, please enjoy this: Three unscripted, me-designed moments from my most recent Gunpoint playthrough that had me laughing or feeling like a badass. These are, I guess, technically spoilers, but since the whole game is devising your own personal way around obstacles, I don't think it'll hurt to see my approaches.

1) I'm standing at the window of a building. Across a small alleyway stands another building, with a guard, above me, looking out. I'm safe now, but when I move my cursor into the space between the buildings, it turns red, telling me that I'll be seen as soon as I step (or leap) outside. He's in pouncing range, and I've upgraded my leap enough to propel me through the window, but there's no chance I'll cross the distance before he puts a bullet in me. I could shoot HIM, maybe, but I've still got objectives left in the level, and no time to clear them before the sniper shows up, blocking the exit.

I slip into Crosslink mode, look at my options. I'm in luck! The switch behind me is on the same circuit (devices on different circuits can't be linked together, usually) as the lights on his floor. I hook my switch to his lights, exit Crosslink, and flick it. Lights go out, he turns around to turn them back on, and as soon as his back is turned, I pounce, crashing through the window and slamming my fist into his face. Awesome.

2) Problem: I need to get through a door, and there are guards on either side of it. I can't open the door myself, and they'll shoot me on sight. What to do, what to do....

Solution: I've bought a new gadget in the between-mission store: the Longshot. It allows me to, with the expenditure of a power core, Crosslink a guard's gun. I laughed out loud when I saw that. I pull out the Crosslinker. A few tweaks later, and I set a tragedy in motion.

I flick a switch, and the lights on the floor go out. Guard A is the closest to the light switch, but it's on the other side of the door. So he activates the hand-scanner to go through. This activates the door... which activates Guard B's (standing guard further down the hallway on the other side) gun... Guard A crumples to the floor, shot. Guard B stands there, slapping at his gun, wondering why it misfired... as I come up behind him and pounce. Beautiful.

3) There's a Pro on the floor below me. Pros are special types of guards, clad in black suits like high-price bodyguards or Will Smith hunting aliens. Annoyingly, they're much harder to manipulate than their less-professional brethren. They won't follow noises. They won't freeze in place when you point a gun at them. They just shoot you, and then you're dead. Like I said, annoying.

I leap down, crashing through the hallway's plate-glass roof. Quick as lightning, the Pro unholsters his gun, points it at me, pulls the trigger... And the lights go out. The door behind him opens. And, grinning at his misfiring gun... I pounce. It is exceptionally Batman.

Gunpoint is still in development. You can follow its progress and sign up to test (which I've been doing for the last nearly-2-years, and highly recommend) at www.gunpointgame.com and on Twitter at @GunpointGame. The game is up for the Audience Choice award at the Independent Games Festival this year, so if what you've read here (and on Tom's blog) sounds interesting, consider voting for it here: http://igf.com/audience.php
Voting ends Sunday 2/19.

Where am I, what's going on?

This is the personal blog of William Hughes, an improv nerd, video game enthusiast, and writer for The Onion's A.V. Club. Expect intermittent bursts of activity, overly academic analysis of pop culture, and puns.

Other things I do online